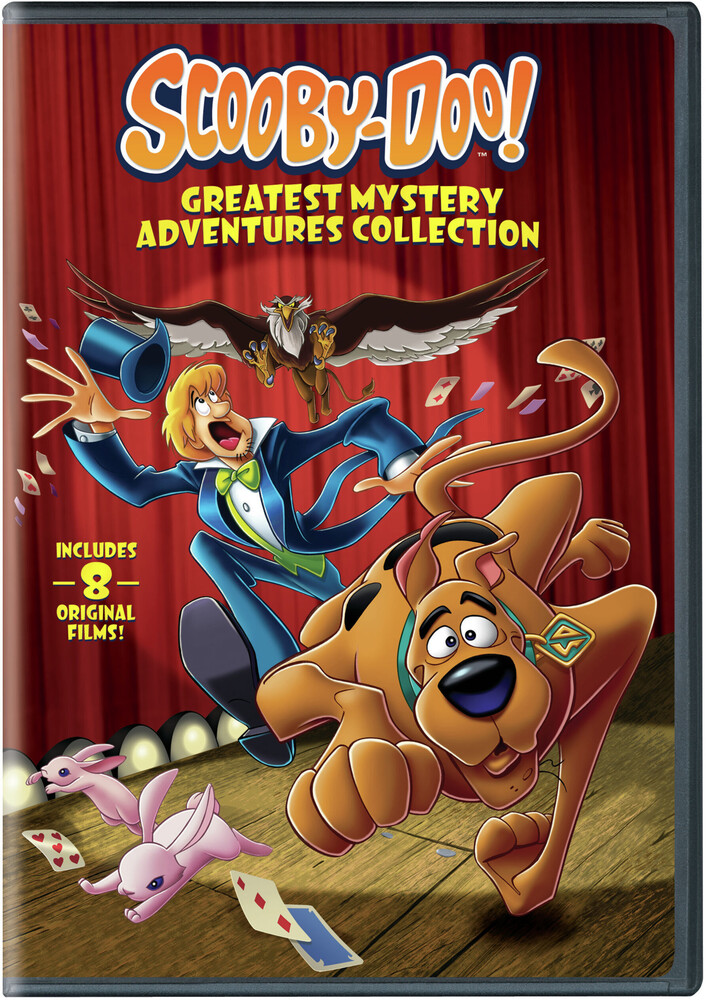 Three-disc set includes: Scooby-Doo And The Cyber Chase (2001)The hunt for a living computer virus sends Scooby and the gang into a virtual reality world based on their previous monster-chasing exploits in this feature-length tale. Voiced by Scott Innes, Frank Welker, Grey DeLisle, B.J. Ward, Joe Alaskey, and Bob Bergen. 70 min. C/Rtg: NR Chill Out, Scooby-Doo! (2007)Like wow, Scoob, we're in the Himalayas trying to stay warm, find something to eat and avoid the Abominable Snowman. Man, we have to climb icy cliffs, explore secret ice caves deep inside Mount Everest and reach the city of Shangri-La-all while trying to keep away from that yucky Yeti. It might be a while before we can get some Scooby Snacks pal. "Ruh-roh, Raggy!" Voiced by Frank Welker, Casey Kasem, Mindy Cohn, Grey DeLisle, René Auberjonois, and Alfred Molina. 73 min. C/Rtg: NR Scooby-Doo!: Abracadabra-Doo (2009)While visiting Daphne's aspiring illusionist sister, Melissa, at the Whirlen Merlin Magic Academy, Scooby-Doo and the gang discover trouble at the school. As the mystery-solving pals try to figure out why a giant dragon has been seen on campus, they uncover plenty of excitement and laughs. Voiced by Frank Welker, Matthew Lillard, Mindy Cohn, Grey DeLisle, Danica McKellar, James Patrick Stuart, Brian Posehn, and Diane Delano. 75 min. C/Rtg: NR Scooby-Doo!: Mask Of The Blue Falcon (2012)Join Scooby and the gang in this animated adventure, as they attend the world premiere of a new movie featuring their favorite super do-gooders, Blue Falcon and Dynomutt, only to get mixed up in a mystery involving the hideous Mr. Hyde-who spoils everyone's good time by unleashing a ghoul-ash of bats, hounds, and slime! Can Scooby-Doo and Shaggy save the day for their silver screen idols? Voiced by Matthew Lillard, Frank Welker, Mindy Cohn, Grey DeLisle, Diedrich Bader, and Jeff Bennett. 76 min. C/Rtg: NR Scooby-Doo!: Stage Fright (2013)When Fred and Daphne place as finalists in a Chicago talent show, Scooby-Doo and Shaggy decide to put together a rival act in secret-but their friendly competition gets put aside after the Windy City theater is visited by a phantom who's cursed the contest! Now, the Mystery, Inc. Gang must take center stage and use their mystery-solving abilities to solve the creepy new case. Voiced by Matthew Lillard, Frank Welker, Mindy Cohn, Grey DeLisle, Troy Baker, Wayne Brady. 78 min. C/Rtg: NR Scooby-Doo! And KISS: Rock And Roll Mystery (2015)If you thought it was scary when KISS met the Phantom of the Park, wait until you see Starchild, Demon, Space Ace, and the Cat get mixed up with the Mystery Machine gang! In this animated adventure, the legendary face-painted rockers hook up with Scooby-Doo to help solve the baffling case of a haunted amusement park. Features the voices of Frank Welker, Matthew Lillard, Mindy Cohn, and Gene, Paul, Eric, and Tommy as themselves. 72 min. C/Rtg: NR Scooby-Doo!: Shaggy's Showdown (2017)Saddle up for some scares when Scooby and the gang take a trip to a dude ranch, only to discover that the outlaw apparition Dapper Jack is on the loose and terrorizing a nearby town. Can the Mystery, Inc. #kids round up the ghostly gunslinger, and just what is the creepy cowpoke's connection to Shaggy? Matthew Lillard, Grey Griffin, Kate Micucci, and Frank Welker supply voices for this animated adventure. 80 min. C/Rtg: NR Scooby-Doo! And The Gourmet Ghost (2018)C/Rtg: NR