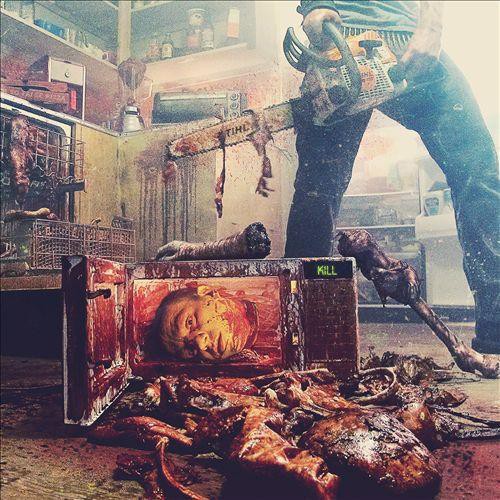 San Francisco's Exhumed play gore-obsessed death metal with a tongue-in-cheek flair and an overall musical approach often reminiscent of Carcass, a band that they have frequently acknowledged as a primary influence. They have endured constant lineup changes to become, if not a highly original act, at least one of the better representatives of their doomed-to-obscurity subgenre. The band formed in 1991 with a lineup consisting of Matt Harvey (guitar, vocals), Col Jones (drums), Derrel Houdashelt (guitar), Jake Giardina (vocals), and Ben Marr's (bass). They made their first recordings under this formation, including the Excreting Innards 7" for Afterworld Records. Giardina and Marr's left the band within the next few years, with Matt Widener (bass) and Ross Sewage (vocals) brought in as replacements. After recording the Horrific Expulsion of Gore demo (1994), Widener left and Sewage took over bass duties. This lineup eventually recorded a split CD with the Ohio band Hemdale, in the Name of Gore, which came out on Visceral Productions in 1995 and featured an absolutely revolting album cover.