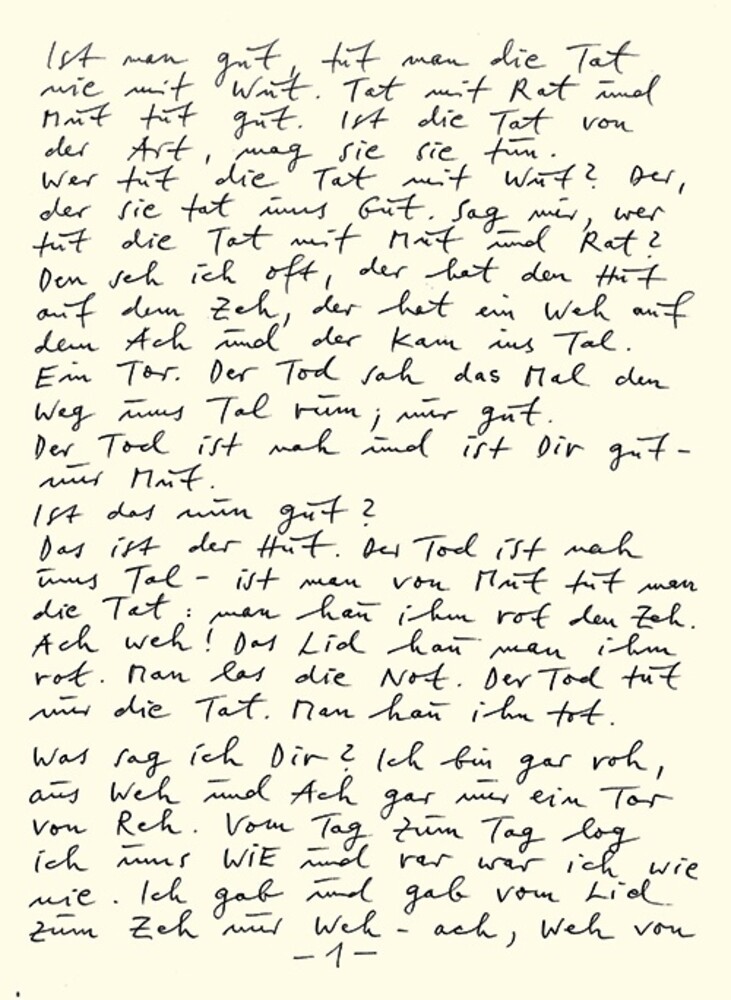 Ich Und Sie - ein Roman aus dreibuchstabigen Wörtern (Me and Her - a novel of three-letter-words) was a work Andrea Tippel started in 1993 and finished in 2009. As the title suggests it consists entirely of three-letter-words. Two CDs in full-color, six-panel DVD-sized digipak; illustrated with pages of the manuscripts of Ich Und Sie, a biographical text, chronology of the work in English by Marc Schulz, and the text "The Speaking Art of Andrea Tippel" by Dorothy Iannone, written in 2019 especially for this publication. Edition of 250. Andrea Tippel was born 1945 in Hirsau/Black Forest, and grew up as the middle of three sisters in Bremen. Her parents were the architects Maria Alexandra Mahlberg and Klaus Tippel. In 1969, she was a state-certified actress (Max-Reinhardt-Seminar in Vienna and Berlin), then studied philosophy and psychology in Berlin, Hamburg, and Munich. In 1971, Tippel moved to Berlin and started to create drawings, objects, composites, texts, and books, as well as a few oil paintings. In 1974 she had her first exhibition with Tomas Schmit, started to produce artist books in 1980, and editions for various galleries from 1987. She maintained close friendships with Suzanne Baumann, Henriette van Egten, Ludwig Gosewitz, Dorothy Iannone, Dieter Roth, Tomas Schmit, Jan Voss, and Emmett Williams. Tippel was appointed as a professor at the Hochschule für Bildende Künste Hamburg in 1997, and co-founded the Dieter Roth Academy (DRA) in 2000. She passed away in 2012 in Berlin. "... Here is a tale, a brilliant tale, one cannot deny, which, even as it astounds us through her perseverance, drives us crazy with a foreboding that this may well be an endless tale. And perhaps this purely personal response to the Speaking Art of Andrea Tippel may well have amused it's creator who often found meanings which, understandably or not, had eluded others... " -Dorothy Iannone, "The Speaking Art of Andrea Tippel" (excerpt)