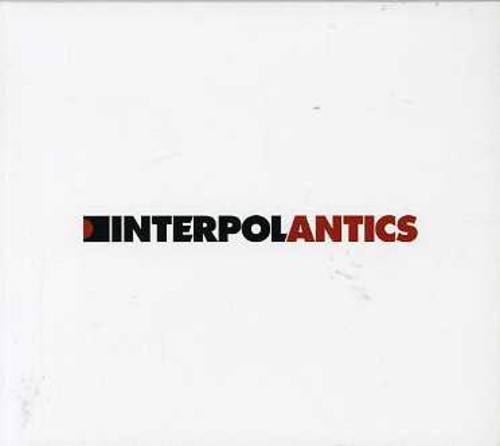 The follow-up to their mega-successful debut is no less brooding and intense, but charged with flashes of color and romance. ANTICS infuses Interpol's dark musical landscpaes with new optimism. "Achingly beautiful... explroes emotional blues, but never, ever plays the blues - Vanity Fair."

''Antics'' is the second album by New York City-based indie rock band Interpol, released in 2004, selling 488,000 copies in the U.S. and over 100,000 in the UK. Although more confident than its predecessor, ''Turn On the Bright Lights'', it largely repeats the same formula of sparse arrangements driven by throbbing bass and strong drums, and intricate guitar lines reminiscent of The Chameleons, with vague, evocative lyrics sung in a resonant, somber voice by vocalist Paul Banks. Musically speaking, the general tone of this record is remarkably brighter than its darker predecessor. It made the top 10 list of several music critics for the year of 2004.

Morse code is used in several places throughout the album's packaging, continuing the nautical themes found in a few of the tracks' lyrics ("Take You on a Cruise", "Public Pervert"). Code for the word "antics" is used on the back panel of the slipcase, as well as in the booklet; other words included in code are "length", "narc", "cruise", and "exit". Photography of the band used in the interior of the album was produced by Ami Barwell.

The album was reissued in August 2005 in the United States with a bonus disc that contained four remixes by the band, a B-side, and the videos for all three singles.

Antics was certified gold by the RIAA on April 1,2009. - Wikipedia