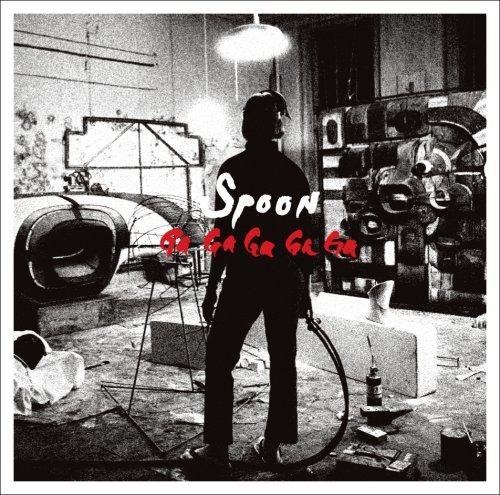 This record starts with "Don't Make Me a Target", a song that builds on Spoon's familiar minimal rhythmic piano/guitar vamp popularized on earlier hits like "Small Stakes" or "The Way We Get By". The album quickly moves into uncharted territory with the atmospheric "The Ghost in You Lingers" and moves through several different stylistic changes from the explosive "You Got Yr Cherry Bomb" to the wall-of-sound horns of radio single "The Underdog". Their most heartfelt batch of songs since 2001's GIRLS CAN TELL.

''Ga Ga Ga Ga Ga'' is the sixth studio album by Austin, Texas indie rock band Spoon. It was released on Merge Records on July 10, 2007 to considerable critical acclaim. Its cover art comes from a portrait of artist/sculptor Lee Bontecou, taken by Italian photographer Ugo Mulas in 1963. The completed sculpture on the right is now in the collection of the Honolulu Academy of Arts.

The album's title is the former title for the song "The Ghost of You Lingers", which was meant to sound like the song's staccato piano part. The band changed the name to the song, but decided to adopt the name "Ga Ga Ga Ga Ga" as the album title, with Britt Daniel calling it a "great little Dadaist term."

An iTunes-exclusive bonus track, "Deep Clean", was packaged with ''Ga Ga Ga Ga Ga''. A limited edition copy of the album was released along with a bonus disc entitled ''Get Nice!'' The disc includes 23 minutes of mostly instrumental songs, and also a few demo tracks. Early buyers of the album also received a free 7" containing a demo of "The Underdog", and the B-side "It Took a Rumor to Make Me Wonder, Now I'm Convinced I'm Going Under", which previously appeared on the UK edition of the "Sister Jack" single.