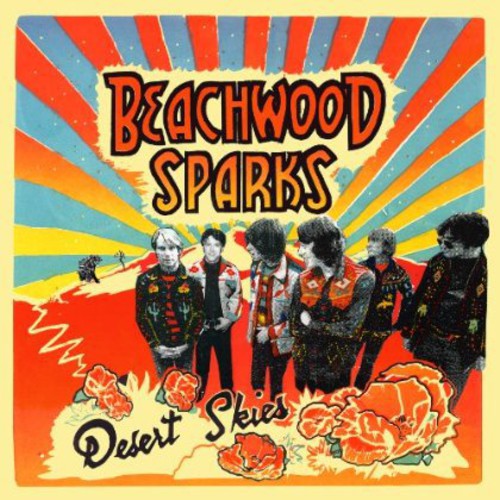 Prior to the release of Beachwood Sparks' 2000 self-titled Sub Pop debut album, the California neo-hippie country-rock outfit had already produced an album's worth of material. Recorded in true DIY style in a small converted one-car garage known as the Space Shed, this would-be debut, titled here as Desert Skies, featured the band's earlier six member line-up.

Centered around guitarist/vocalist Chris Gunst, bassist/vocalist Brent Rademaker, and keyboardist/lap steel player Dave Scher, this version of Beachwood Sparks also included guitarist/vocalist Josh Schwartz, keyboardist/lap steel player Dave Scher, drummer Tom Sanford, and percussionist Pete Kinne. Having formed in 1997, the six-piece Beachwood Sparks had grown from a fledgling noise-rock combo into a '60s and '70s country-rock inspired outfit whose combined love of such '80s Paisley Underground bands as the Rain Parade and the Dream Syndicate, as well as the innovative country-rock style of Gram Parsons and the Eagles, helped them build a loyal following in the Los Angeles-area during the late '90s. Spurred by an offer to record a single for Bomp!, Beachwood Sparks embarked on these recordings with an eye to self-releasing the album. Ultimately, only "Desert Skies," and "Make it Together," ended up as a Bomp! single with the rest of the tracks abandoned as the band lost interest, changed members and evolved into the four-piece that recorded 2000's Beachwood Sparks, 2001's Once We Were Trees, 2002's Make the Cowboy Robots Cry and the band's 2012 reunion album The Tarnished Gold. While the band always evinced a love of groovy, twangy '70s country rock, here they strike balance between their earlier indie-rock influences and bourgeoning country explorations. Even a song like the opening title-track cut, which also opens the band's Sub Pop debut, reveals a warmer, more fluid interpretation here that has more in common with bands like Big Star and Teenage Fanclub. Elsewhere, the epic "Sweet Julie Ann," with its layered guitar atmospherics a'la the Jesus and Mary Chain, is a long lost Beachwood Sparks classic and its a wonder the band never revisited it on later records. In some ways, as evidenced by mellow vibe of 2012's The Tarnished Gold, the band was on a circular journey back to this commingling of dream pop and country. It's a revelation to hear just how fertile the band's songwriting and overall sound was during these early days.